Seagulls 63″ span sport-scale Reno racer is a real beauty. Unusual, eye-catching, and built for speed, it’s sure to appeal to intermediate and advanced pilots in equal measure.
Like the full-size aircraft, Seagull’s Radial Rocket ARTF is a real attention grabber, on the ground and in the air. The nostalgic colour scheme is based on Radial Rocket number 105, which competes at the Reno Air Races in the Sportsman class. With a broad flight envelope and smooth aerobatic performance, the Rocket adds real excitement to any flying session. 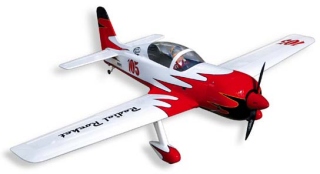