The Space Walker looks like it’s been around for decades but believe it or notit’s only been around since the 1980’s although the construction techniques havesuccessfully been used since the 1920’s.The original Space Walker was powered by a 65.HP engine but designed to accommodateengines up to 150.HP!Seagull Models have brought this representation to life with this sleek 2 seat,82.7inch wingspan version, which is suited to take the power of 120 to 150 fourstroke engines and will return a smooth scale type feel and stunning looks.
All in all, a fun large-scale model that flies like a pussycat, not that wewould want you to try and fly a pussycat! 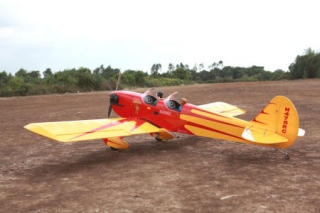